For those of you who wholeheartedly supported the Romney/Ryan ticket, particularly when the future conservative superstar Paul Ryan was added, you may be feeling disappointed in Ryan’s latest fiscal compromising on the budget. Then there’s the immigration compromise, but that’s for another day.

We are the Truth Watch so let me help understand Ryan’s seemingly inexplicable slide to the middle; it was totally expected. I can tell you the exact day I knew this about Ryan and thusly he lost my support. It was during the election when Ryan said he was comfortable with Romney’s stance on abortion, which differed from Ryan. In other words, he was willing to compromise his position on abortion because Romney’s was “a vast improvement to the status quo.”

Here’s where the lack of my surprise of Ryan’s shifting his conservative positions on fiscal and national security did not surprise me.

Any person, who can compromise on the issue of life, and more specifically baby murder, will have no problem compromising on the budget or illegal aliens. The Bible clearly explains this sequence of selling-out: “he is a double-minded man, unstable in all his ways” (James 1:8)

My buddy Steve Deace clearly explains the problem. Elected officials such as Paul Ryan are people of positions and not convictions. The former will compromise even on core values whereas the latter will stand rock-solid against such compromise.

I pray one day Americans will finally come to understand this phenomenon. 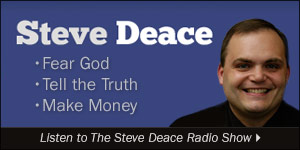